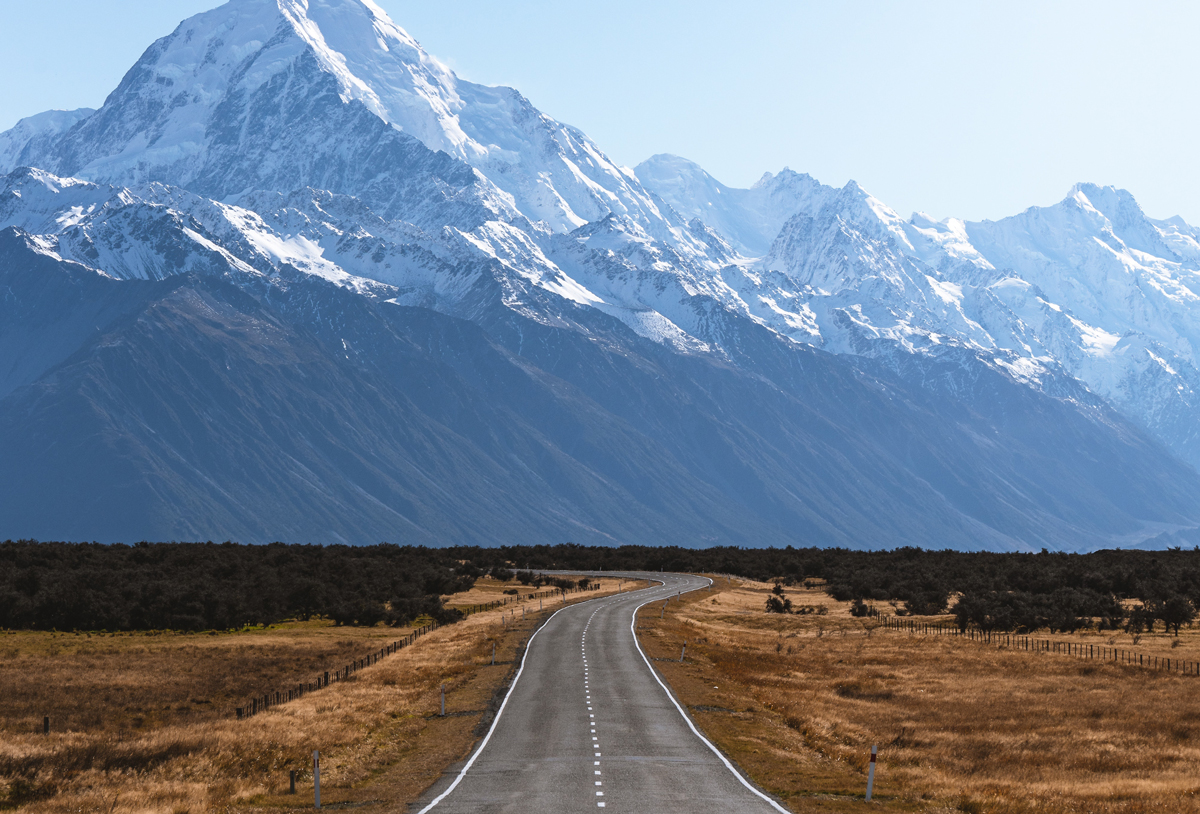 Bek, Peter, Emma and Adrian Bailey experienced New Zealand at its best in April when they took a two-week self- drive holiday there.

We left Auckland early in the morning and drove to Paihia via Waipoua Forest to take a look at the kauri trees. Their height and girth is amazing – the children, when told we were going to look at trees, weren’t all that thrilled but were more than impressed when we took the short walks to see the Four Sisters, Tane Mahuta and Te Matua Ngahere. From there we drove east to Paihia. The drive was easy and scenic. Paihia was our base for the next two nights. It’s a small, seaside town with plenty of restaurants. It was quite relaxing sitting on our balcony at the end of the day, looking over the Bay of Islands and the ocean.

We hadn’t originally planned on visiting Hobbiton; however, Emma talked us into going and I’m glad she did. I did warn them all that if we did visit Hobbiton, there would be a lot of driving that day. We left very early from Auckland and drove to Waitomo, having already booked the Waitomo Glow-worm Caves tour and the Ruakuri Cave tour. Both were amazing. Looking up at the glow-worms from the boat towards the end of the tour was like looking up into the night sky. The Ruakuri tour was amazing from the moment we entered the man-made tunnel entrance. We saw more glow-worms and even got close to some for a better look, thanks to our guide. After the Waitomo caves, it was back into the car for a drive to Hobbiton, which was the location for the filming of both The Hobbit and The Lord of the Rings series and features the Hobbit holes used in the movies. You have to book on a guided tour, which runs for around two hours and finishes at the Green Dragon Inn for a beer/cider or non-alcoholic beverage. It was very busy when we did it, and I would definitely recommend to anyone that they pre-book their tickets as you wouldn’t want to get all the way out to the middle of nowhere only to find you couldn’t get on a tour! After an hour’s drive from Hobbiton, we arrived in Rotorua.

Yes, it smells, but not all the time! Arriving bright and early, we took ourselves to Hell’s Gate Geothermal Park. There are many different pools, smells and formations here. There are also various spa facilities but we chose to just walk around the hot pools. Some of us (me) found them infinitely interesting, others wanted to leave because of the smell! I would have enjoyed going to more thermal parks, but I was promptly outvoted. The Redwoods Treewalk is about five kilometres from the centre of Rotorua. It’s a 700 m walk along 28 bridges and 27 decks suspended amongst the trees. At night when we went (the Nightlights tour), the forest is gently lit with 30 giant wooden lanterns (up to 2.5 m tall) and 40 slowly changing colour spots. It was quiet, peaceful and amazing. Both the kids and the adults loved it and I definitely recommend taking this walk either in the day or at night or both. A highlight for the kids was Skyline Rotorua. After catching the gondola to the top, we spent quite some time riding the luge. There were several tracks of varying speeds, all of which were loads of fun. After we had finished, we enjoyed a buffet dinner at the Stratosphere restaurant – so much food, so many choices, all of them delicious! I would also recommend booking this in advance as it was quite busy.

As we were visiting both the North and South islands, we travelled on the inter-islander ferry that connects the two islands. There are several crossings a day between Wellington (North) and Picton (South) across Cook Strait. Taking Nicole’s advice, we left our hire car at the ferry terminal in Wellington, checked our bags and boarded on foot. When we left Wellington, it was a little rough on Cook Strait, but when we entered Queen Charlotte Sound, it was all smooth sailing and very beautiful. Once in Picton, we disembarked and made our way to the car hire office and collected a new hire car for use on the South Island.

Due to a road closure, we had to take the long route from the ferry terminal at Picton to our next stop at Hanmer Springs. It was a long and winding drive but very scenic and picturesque. That evening we visited the Hanmer Springs Thermal Pools and Spa. There were a variety of pools with different temperatures, including sulphur pools. It was freezing out of the pools but so warm in the pools themselves. I’d definitely like to return to Hanmer Springs and spend a few more days there.

There was certainly no shortage of things to do in Queenstown despite it not being the ski season when we were there. We took a lake cruise on the TSS Earnslaw, went on a KJet jet boat up the Shotover River, and visited Skyline Queenstown for more luge rides. Emma had seen the paragliders coming down over Queenstown and was adamant that she was going to do it. And do it she did. We watched her come down – slowly twisting and spinning and loving every second of it. This was the highlight of her NZ holiday.

The overnight cruise on Milford Sound was a huge highlight of the trip for all of us, which we had booked on Nicole’s recommendation. The coach transfers from Queenstown gave us a break from driving and the coach was comfortable with large windows so you could take in the scenery. The driver provided us with interesting and informative commentary on the way there. We made a number of stops – toilet breaks, lunch break and sightseeing stops/quick walks – which broke the journey up for us. The scenery was wonderful and also included a drive through the 1.2-kilometre, one-lane Homer Tunnel. Once on the boat, we all (60 passengers plus staff) gathered in the dining room for a safety briefing before we were given the keys to our cabins. Some cabins had twin beds; others had double beds – all had ensuite bathrooms. When the cruise departed later in the day, there were very few boats on the water besides ours. The cliffs of the Sound were breathtaking – so big that you lost all sense of scale. We travelled briefly out into the Tasman Sea then back into the Sound. Waterfalls, birds and seals were the sights we saw that afternoon. The mountains were majestic as they rose into the sky, often shrouded in cloud. Once we arrived in the cove where we were to spend the night, passengers had the option to go kayaking or travel on a motorised aluminium boat. The food was delicious and plentiful and everything was very well organised. Breakfast was early and when we set sail back to the port, again, we were one of the few vessels on the water. One of the highlights of the cruise was being joined by a pod of dolphins who swam around us and surfed at the bow of the boat for quite some time. Once we arrived back at the port, the same driver/coach was waiting for us to take us back. I’d happily take the coach again as it was so easy. I look forward one day to going back and doing the Doubtful Sound overnight cruise!

There were some days with lots of driving, much of it on curving and winding roads. I didn’t mind that too much, though, as the scenery was all gorgeous. Even the children didn’t mind being in the car. I would suggest, however, that you allow extra time to get to places – distances in NZ take a little longer to drive than they do on our flat, straight roads in Australia. I’d also recommend hiring a GPS from the car hire company. We relied on our phones for navigation on the North Island but had a GPS on the South Island. It was much easier and we didn’t have to rely on phone coverage as much.

Nicole had suggested that we leave our hire car in Greymouth and catch the TranzAlpine train to Christchurch, where we were departing from to fly back to Australia. The journey was lovely; it was raining and misty for about half the journey but the scenery was still amazing. After we passed through the 8.5-kilometre Otira Tunnel, the weather cleared and the view was even more gorgeous! This journey is a must-do. We also travelled the Taieri Gorge Railway on a train from Dunedin to the Taieri Gorge. This four-hour rail journey negotiates the winding gorge, travels through 10 tunnels and across numerous bridges, including the famous Wingatui Viaduct – the second-largest wrought-iron structure in operation in the world. On this train, we were able to enjoy the open-air platforms, too. During the trip, the train stopped at the tiny siding at Hindon, where everyone disembarked to take photographs and have a brief walk around. At the turnaround point at Pukerangi, we were once again able to disembark and watch whilst the engine was detached and reattached to the other end of the train.

The week before we were to depart Australia, Nicole advised that a torrential downpour and subsequent flooded river had destroyed the Waiko Bridge at Franz Josef, closing access from Queenstown, with the bridge having to be rebuilt. We flew out of Australia, knowing that if the bridge wasn’t completed in time that Nicole would change our arrangements, which would, unfortunately, result in us missing out on landing on the Franz Josef and Fox glaciers and taking the rail journey from Greymouth to Christchurch. Amazingly, they had the bridge rebuilt in record time and our travel plans didn’t need to be changed. The roads between Queenstown and Franz Josef were gorgeous but you could see the damage that had been caused by the once-in-a-century downpour. The single-lane Waiko Bridge, rebuilt with wooden slats/planks, was all the more impressive given the speed with which it had been replaced (they got the army in to get the job done in record time). It made an interesting sound when we drove over it! Nicole kept in touch with me throughout our journey to update us on the progress of the rebuild, which made our journey less stressful, knowing that she could change our arrangements for us without it taking time away from what we were doing.

New Zealand has a multitude of great family accommodation options, with many cabin parks, motels and hotels available. We stayed in two-bedroom accommodation throughout the holiday, which ranged from 3 to 5 Star. Some of our favourite spots were the Settlers Inn at Hamner Springs and Glenfern Villas at Franz Josef. The staff were so helpful and friendly and made our stay much more pleasant.

Thanks to Nicole and the team at the Holiday and Cruise Centre for making our trip a memorable one.